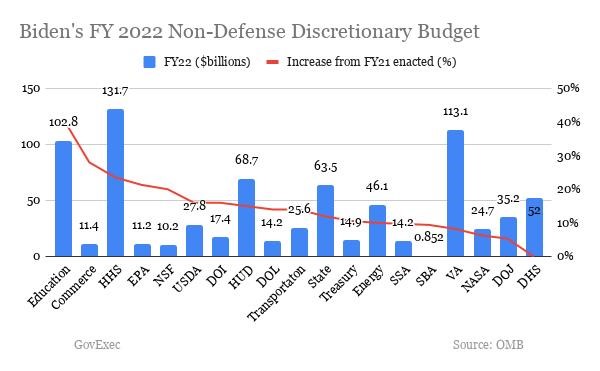 Below are a few highlights from the proposed budget that align with the work of ANA:

The Biden administration has been vocal about priorities that will transform the health care system. However, the administration’s budget is slightly more than a wish list. Ultimately it is up to Congress to fund the agencies. ANA urges the Administration and Congress to focus on rebuilding and transforming the health care system to improve on the challenges brought forth during the pandemic. Nurses have been the agents of transformative change in facilities, systems, and communities to support improved patient outcomes and advancing equity. Building on these successes, ANA will work with the agencies and administration to build on the budget priorities to continue to put nurses at the forefront of change.

ANA is also working on the Hill for legislation that will address infrastructure and access for telehealth services, PPE for the current and future public health emergencies, and workplace safety programs for nurses. ANA’s advocacy includes a multi-pronged approach to deliver what nurses need in all settings. It is clear through the first budget of this administration that health care is a top priority to improve as we transition to a post-pandemic environment.

President Trump signed a new executive order (EO) on October 3 relating to new policies the administration intends to implement in the Medicare program. The EO on Protecting and Improving Medicare for Our Nation’s Seniors builds upon a previous EO from October 2017, Promoting Healthcare Choice and Competition Across the United States, and the subsequent report, Reforming America’s Healthcare System Through Choice and Competition. The EO is intended to reform the Medicare program overall. The policy proposals address Medicare Advantage plans which are granted more flexibility under law in determining coverage and payment, as well as the traditional fee-for-service program.

Section 5 of the EO affects advanced practice registered nurses (APRN) and physician assistants (PA) in significant ways that the administration hopes will allow patients to spend more time with their providers. This section directs the Secretary of Health and Human Services (Secretary), within one year, to propose reforms to the Medicare program that would:

EO’s are typically broad and don’t get into the finer details of what is being proposed or the actions that will be taken. While we can make logical assumptions with some instructions in the EO, there are others that are less clear and we will work with the administration to clarify these issues as proposals are developed.

The subsections of the EO that would eliminate the unspecified supervision requirements, conditions of participation requirements, and licensure requirements in Medicare that limit clinicians from practicing at the top of their profession, would be done through the federal regulatory process. This involves the Secretary writing a “proposed rule” (i.e. regulation) and allowing for a 60-day public comment period. After which, the Secretary will publish a “final rule” and the new regulations will move into the implementation process. ANA will be engaging with the Secretary throughout the process to get the best regulatory results for nurses.

The third subsection dealing with pay disparities between physicians and other clinicians only instructs the Secretary to conduct a comprehensive review of regulatory policies.  Currently, the Medicare statute stipulates that nurse practitioners and clinical nurse specialists are paid at 85 percent of the physician fee amounts that are set annually by CMS for fee-for-service. Based on previous actions and communications with the Secretary, we expect he will do what he can to eliminate pay disparities in certain parts of Medicare through regulation and also advise Congress to eliminate the pay disparities through legislation.   Any legislation would need to be introduced and go through the normal legislative process.

One wild card in this proposal is the elimination of unspecified CoP requirements. CoP are federal regulations that certain health care facilities must comply with in order to be reimbursed by Medicare and Medicaid. While we would like to see some CoPs go, like the one that requires a certified registered nurse anesthetist to be supervised by a physician, there are others that positively benefit nurses and patients alike.

ANA is pleased that the Administration recognizes the value of APRN services to health care consumers and the Medicare program. We look forward to working with the Administration and Congress on on the development and implementation of these policies through the regulatory and legislative processes.

By: Gregory Craig and Matthew Fitting

Following a midterm election cycle in which voters consistently listed health care as their top issue priority, members of the 116th Congress have wasted no time in proposing, introducing, and debating several measures that would significantly impact the way Americans receive and pay for health coverage.

Health Care Legislation in the U.S. House of Representatives

Most recently, Rep. Frank Pallone, Jr. (D-NJ), the Chairman of the House Energy and Commerce Committee, on March 26, 2019 introduced H.R. 1884 – the “Protecting Pre-Existing Conditions and Making Health Care More Affordable Act of 2019”. This legislation would strengthen many of the consumer protections and pre-existing conditions provisions of the Affordable Care Act (ACA), promote individual health insurance enrollment on the ACA Marketplace, and roll back regulatory actions that the administration has implemented since January 2017. Some of the specific provisions would:

ANA has publicly supported many of the provisions in H.R. 1884 and has consistently promoted a bipartisan proposal – similar to the reinsurance proposal included in H.R. 1884 above – that Sens. Lamar Alexander (R-TN) and Patty Murray (D-WA) introduced in the previous Congress that would have established a similar program and restored cost-sharing payment reductions that help low-income individuals afford co-insurance and deductible costs (the Administration canceled these payments in October 2017).

The proposal that has arguably grabbed the most headlines, however, is “Medicare for All,” a general campaign slogan that was recently introduced as legislation by Rep. Pramila Jayapal (D-WA) with a Senate bill soon to follow to be introduced by Sen. Bernie Sanders (I-VT). The bill would implement an expanded government-run Medicare program and do away with much of the private insurance system currently in place (well over half of Americans currently receive health insurance through their employer or in the Marketplace).

While the legislation is consistent with ANA’s support for universal access to health coverage, there are several provisions that could negatively impact the nation’s four million registered nurses, as well as the patients for whom they provide care. Some of these include:

The Department of Justice on March 25 unexpectedly sent a letter to the Fifth Circuit Court of Appeals to state that the Administration fully supports the December 2018 U.S. District Court decision in Texas v. Azar that would invalidate the entire Affordable Care Act (the U.S. District Court decision was stayed pending appeal; the Administration had previously only supported striking down parts of the ACA, including pre-existing conditions provisions). This case will likely make its way to the U.S. Supreme Court for a final decision, though that decision would probably not come until 2020 or later. Invalidating the entire ACA with no plan to replace it would be extremely disruptive to the U.S. health care system and would result in enormous insurance coverage and financial losses.

On March 27, the Federal District Court for the District of Columbia threw out Medicaid work requirements in both Kentucky and Arkansas. This is the second time that Kentucky’s Medicaid work requirements have been blocked in federal court. Arkansas’ work requirements were implemented in June 2018 and have resulted in 18,000 individuals losing coverage. The same federal court on March 28 issued a ruling that rejects the administration’s final rule that expands the availability of Association Health Plans. ANA has consistently opposed expanding the availability of these plans, as they represent an end-around of the ACA’s essential health benefits requirements for insurance coverage.

ANA is committed to a pragmatic approach to ensuring universal access to quality, affordable, and accessible health care for all Americans, particularly vulnerable populations and those with pre-existing conditions. As ANA stated in a recent press release: “Universal access to a standard package of essential health care services for all citizens and residents is of paramount importance to the American Nurses Association. Nurses have a critical voice in this debate, and ANA is committed to advancing policy initiatives that provide and expand access to affordable coverage and quality care for all.”

This is the latest chapter in the decades-old health care debate – we expect that many proposals will be offered before the 2020 election. ANA will continue to be involved and actively advocate for nurses and the patients for whom they provided care.