As you are probably aware by now, the ANA Board of Directors recently made the decision to uphold the 2019 Membership Assembly (MA) vote that rescinded the 1985 Presidential Endorsement Process and replaced it with a Presidential Engagement Policy. Whether to uphold the will of ANA’s highest governing body, which voted overwhelmingly to end the endorsement process, or endorse a presidential candidate in this year’s election, was one of the most important and toughest decisions this board has made.

We did not take this responsibility lightly. Each of us read every communication sent to us and as a group, we relitigated the debate that occurred at the 2019 Membership Assembly regarding the pros and cons of each option. I trust that you can appreciate the anguish that each board member experienced in making a decision. As an elected leader, could you ignore the will of the majority who, after debating this issue for two years, has already spoken through their vote at Membership Assembly, or send a message that ignores that result even if legally permitted to do so? I believe that you would agree that to undertake such a move sends a message that the ANA board ignores the ANA member governing body.

In making this decision, board members had the tough responsibility of detaching from their personal political views and experiences to act in the best interest of the association. ANA represents the interests of 4.2 million registered nurses with diverse political views. As a board, we could not ignore this fact given we are in the middle of one, if not the most, divisive election in history. The decision of the board, like that of the Membership Assembly, was evidence-based, and it underscored our belief in the critical thinking of each registered nurse.

As a professional organization, ANA does not have a vote in national, state or local elections – but individually, you and I do. ANA’s Presidential Engagement Policy encourages each nurse to not only get out and vote – but to get other nurses and nurse advocates out to the polls as well. As ANA’s president, I know ANA benefits through its work with members of both parties to promote the profession before Congress and with the administration. As a Black man, who has spoken out against racism and the current political temperament fomenting hate and divisiveness, I pledge to personally get out the vote for the candidate that I believe will best represent my own values and priorities for a safe, equitable, just and compassionate country.

I urge you to vote, engage and campaign for the candidates, from those running for president, down the ballot to members of Congress and state and local offices, who most align with your own political views – informed by your personal values and experiences and your professional responsibilities, guided by the Code of Ethics for Nurses.  This November and beyond, we must always fight for what is right for nurses, our patients and the public. 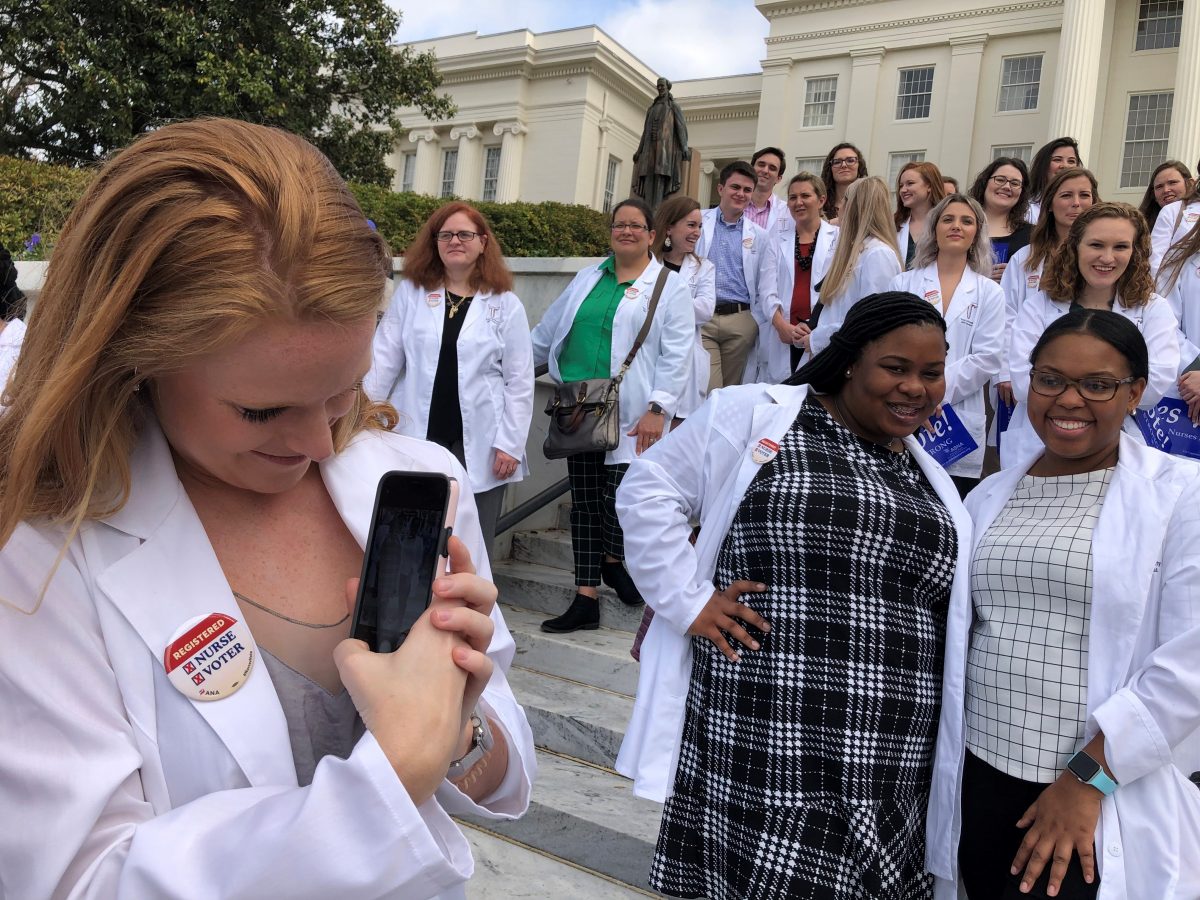 We are hitting a frenetic stretch in the presidential primary campaign with ‘Super Tuesday’ this week.  This day officially begins the onslaught of state elections, continuing debates and campaign ads flooding the airwaves. It can be quite easy for nurses to feel overwhelmed with the daily presidential election coverage.

Senator Bernie Sanders has emerged as the Democratic frontrunner with victories in Iowa, New Hampshire and Nevada. Vice President Joe Biden hopes to gain momentum following his victory in South Carolina and a second-place result in Nevada. Mayor Mike Bloomberg is a wild card ahead of ‘Super Tuesday’ and has been spending hundreds of millions of dollars on paid advertising since entering the race.

Senator Bernie Sanders spoke about nurses in last week’s debate in South Carolina. Sanders referenced nurses when speaking about his debt forgiveness proposals, an issue that continues to plague young nurses across the country.

We will know more about the race following Tuesday’s results, though we expect they won’t be fully reported for a few days. It is still somewhat early in the primary race, but after ‘Super Tuesday,’ it will no longer be early, and we can expect some candidates to suspend their campaigns.

To that end, nearly six months ago the American Nurses Association (ANA) launched nursesvote.org to cut through the noise and ensure nurses and nurse advocates had the information they needed to cast their vote and make their voices heard in 2020.

Nursesvote.org is a one-stop shop on everything nurse advocates need surrounding the presidential election. Our “How to Get Involved” toolkit is a comprehensive guide on everything from phone banking to information on volunteering at your local polling precinct. We encourage all visitors to download the toolkit regardless of which candidate they might support. As the Democratic field continues to shrink, we encourage you to check back with our candidate page so you can learn where every candidate stands on issues impacting nurses, their patients and the nursing profession. Our voting ‘Action Center’ will also enable you to check if your voter registration is up-to-date, find the location of your polling place and even how you can vote early in certain states.

Some of the latest developments on nursesvote.org include the development of a “#NursesVote Social Media Corner.” Here we celebrate and highlight nurse advocates engaging in elections by posting their pictures and sharing them on our RNAction Facebook and Twitter. The fastest way to get featured here is to post a picture of yourself engaging in #NurseAdvocacy while using the #NursesVote hashtag. If you wish to inquire about our popular ‘Registered Nurse, Registered Voter’ buttons, please feel free to email us at rnaction@ana.org.

Now is the time, more than ever, that nurses need to engage, have a seat at the table and make their voices heard, regardless of where they are from or who they support.

In recognition of National Voter Registration Day this week and ahead of next year’s presidential election, the American Nurses Association (ANA) launched its new and improved #NursesVote website this week. This new resource for ANA members and nurse-advocates everywhere builds on our work last fall, when thousands of nurses engaged with ANA’s #NursesVote Action Center to ensure they had all the information they needed to cast their vote and make their voices heard.

Looking ahead to 2020, the new #NursesVote expands on those efforts with a heightened focus on the presidential race. Our interactive registration tool continues to help voters in every state confirm that they’re registered to vote (or get registered if they aren’t), locate their polling place, or find out what’s needed to vote absentee or early. For nurses in particular, we know their schedules might not provide the opportunity to cast their ballots on Election Day itself.

Additionally, #NursesVote is your go-to resource for information on the candidates as their campaigns progress, ANA’s nursing priorities, and how best to engage with and support the candidate of your choice. ANA encourages all nurse advocates to become well informed voters and help ensure every presidential candidate considers advancing the nursing profession to be one of their core priorities.

Our candidates page provides a breakdown on the ways in which each candidate has supported key federal legislation and policies on issues that include nursing education and workforce development, home health care and APRNs, how to ensure nurses are equipped to help fight the opioid epidemic, and more. ANA is heartened to know it will have a partner to work with in the White House regardless of the election’s outcome.

Also included are sections that detail the most pressing federal advocacy priorities impacting nursing, as well as a newly released comprehensive guide for those looking to engage with the various presidential campaigns – either as a volunteer or simply as a concerned citizen and nurse-advocate. From running a voter registration drive to making the most of an upcoming campaign visit in your area, #NursesVote will help you hold candidates accountable and ensure other voters understand why nursing issues are an essential part of the discussions taking place between candidates and the constituents they hope to represent.

ANA empowers nurses across the country to become politically engaged advocates and looks forward to hearing how the new website helps further this mission.