Last week, I represented the American Nurses Association (ANA) before the United States Senate Finance Committee to reiterate the urgent need to provide nurses a sufficient supply of personal protective equipment (PPE), safeguard the mental health and well-being of nurses, and address the racial health disparities exacerbated by COVID-19. Participating in a Senate hearing for the first time was an eye-opening experience. It was evident that senators unanimously respect and appreciate the significant sacrifices being made by nurses in response to COVID-19. What came to light during the hearing was that ANA’s bi-partisan approach to advocacy is working –as both sides of the aisle were interested in hearing our message and ensuring that the nation’s 4 million registered nurses are at the witness table as Congressional debate continues over access to PPE. More needs to be done to ensure nurses have access to PPE – therefore I urge each of you to help amplify our collective voice by taking ANA’s latest PPE survey and contacting your members of Congress today.

As ANA president, I am determined to ensure that ANA continues to be at the table to advance the voices of nurses and the patients they serve. This means the association representing the nation’s registered nurses needs to work with those who are elected regardless of political affiliation. Having good working relationships with the Administration and Congress allows for productive conversations even when we disagree. This approach has provided ANA’s leadership, including me, the opportunity to proactively discuss the threats our nurses face on the frontlines of the pandemic while voicing our opposition over the Administration’s defunding of the World Health Organization or the lack of action in authorizing the Defense Production Act. Despite these differences, ANA is recognized on Capitol Hill and within the Administration as the voice of nursing. This has allowed ANA additional opportunities to meet with influential decision makers.

In 2019, ANA’s highest governing body – its Membership Assembly – voted to move away from endorsing presidential candidates. In this presidential election cycle, ANA is focused on equipping nurses with information about the candidates to better engage in the 2020 elections. While ANA is not supporting a specific presidential candidate, I encourage every nurse and nurse advocate to actively participate in the political process, and vote on November 3. The decision not to endorse was based on recommendations of a bi-partisan task force made up of influential nursing leaders. ANA has developed NursesVote to help nurses activate, educate, support and vote for the political candidate of their choice. The ANA-PAC stands by its long history of endorsing pro-nursing Congressional candidates who typically have strong relationships with our Policy and Government Affairs staff and our Constituent/State Nurses Associations.

Since the beginning of the pandemic, ANA has met with the White House and has interacted with a number of federal agencies: the Department of Health and Human Services, the Department of Labor and the Federal Emergency Management Agency to raise concerns about a lack of PPE among other pressing issues. This is in addition to political advocacy efforts on Capitol Hill, which have already resulted in wins for nurses, outlined here in a June Capitol Beat blog. Nurses are at the table – and making a difference.

ANA’s advocacy focus is to ensure our ability to expand and promote nursing’s agenda and to fight for the profession and the patients they serve. We make our concerns known both publicly and in personal meetings with elected officials and their staff. ANA will not remain silent. We continue to lead the charge for nurses. 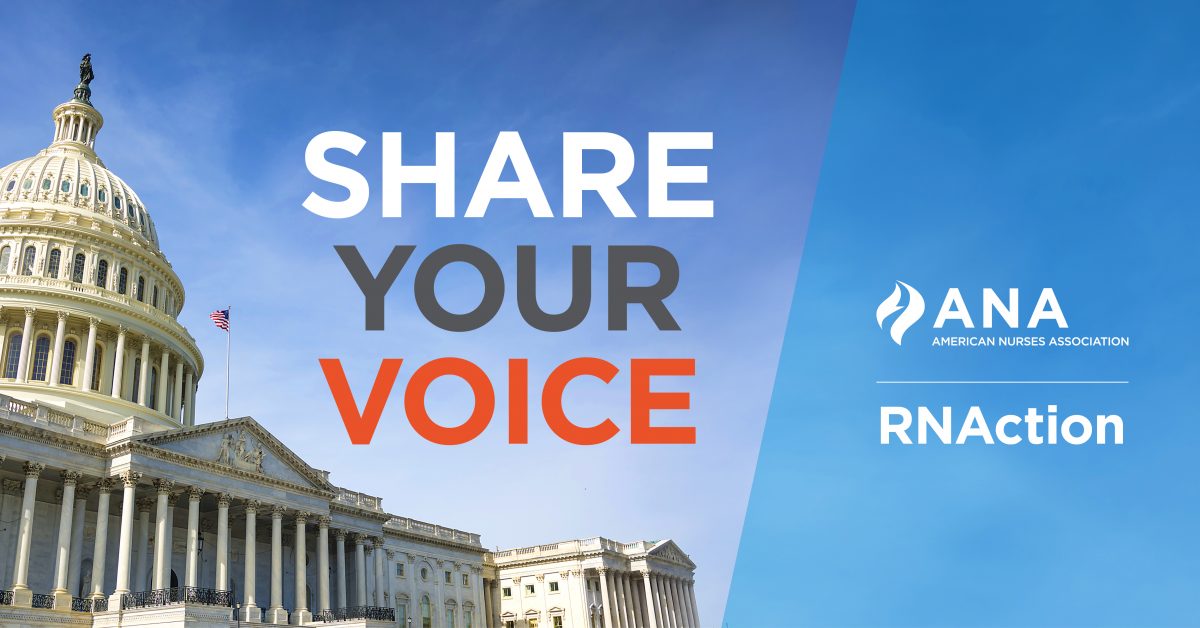 ANA’s annual Membership Assembly (MA) held in June has gone virtual resulting in the cancellation of our popular Hill Day. ANA staff quickly pivoted and launched a supercharged, nationwide Virtual Day of Advocacy centered on a call to action. This Virtual Day of Advocacy will take place on June 25 – Take Action Here! Our call to action focuses on rebuilding the public health workforce and infrastructure by funding community-based care and the CDC so our nation can better withstand the COVID-19 pandemic and the next national health crisis and build towards a future of strength.

Why a Day of Advocacy? We moved to a Day of Advocacy this year which involves one call to action as opposed to the typical 3-4 legislative issues solely focused on nursing priorities. We abandoned a virtual hill day because it was not fair to ask nurses working all hours and continue to combat the COVID-19 pandemic to take time out of their day for a phone call that is extremely difficult to schedule among participants with varying schedules. The Virtual Day of Advocacy provides a much easier and public platform for nurses and nurse advocates to make their voices heard.

Who does this target? By leveraging our call to action platform, we’re able to make this much larger and all-encompassing campaign than our typical Hill Day. We also acknowledge our regular participants will miss out on the wonderful experience of a coordinated Hill visit to see their members of Congress and their staff. However, as opposed to the limitations of inviting only MA attendees, local nursing students and members from the tri-state Washington Metro area, ANA staff are able to open this campaign up through social media (RNAction Facebook and Twitter), all ANA members, nursing schools throughout the U.S. through a coordinated effort with our constituent state nurse affiliate connections so staff can drive increased participation and growth of our RNAction grassroots community. Last but not least, through a Washington Post partnership, we’ve procured advertisements for the Day of Advocacy to both members of Congress and their staff along with nurses and the general public.

Additional Information: ANA’s Policy and Government Affairs team has released a video on why advocacy is important, how to take action, personalizing your message and how to send and/or Tweet to your members of Congress.

What’s next? As you are taking action and sending your letter/tweet to Congress, please take an advocacy selfie and post that using the #RNAction hashtag or @RNAction handle. We are also asking all of those who participate in our Day of Advocacy to continue subscribing to our RNAction alerts and participate in future calls to action. COVID-19 has shown once again the impact of nursing on the overall health and well being in the U.S. We are asking all of those who join our community through this Day of Advocacy to make the commitment to not make this a one-time action. Pledge to continue advocating for nursing and amplify their voice on the national stage.

Nurses continue providing care and performing tremendous acts of kindness in the wake of this devastating pandemic. This despite varying degrees of a lack of protective equipment or resources and added strain to their families and loved ones. ANA’s Virtual Day of Advocacy provides an engaging platform for nurses, nurse advocates, nurse administrators, nursing students – and anyone interesting in promoting the nursing profession – to share their story and make their voice heard. So, share your voice and take action from now through June 25.

To many nurses around the country, the talk about healthcare reform in the nation’s capital is just that: a whole lot of talk. But if the current healthcare bill being considered by the Senate passes, are you ready for how it will impact your practice and the nursing profession as a whole?

Take hospital funding, for example. Love it or hate it, it’s a fact that “Obamacare” (or the  Affordable Care Act, “ACA”) drastically reduced the amount of money hospitals spend annually on uncompensated, or “charitable,” care.

In one state alone, Minnesota, hospitals have seen their uncompensated care costs decline by 17% since the implementation of the ACA, saving hospitals in the state about $53 million annually.

Such numbers are far from uncommon, and are probably similar where you live. The reason is simple: when more people have insurance, more people are able to pay their hospital bills. Unfortunately, the healthcare changes being considered by the Senate would leave 49 million people across the US without health insurance, once again increasing the need for hospitals to provide enormous (and enormously expensive) amounts of charitable and otherwise uncompensated care.

These increased costs will need to be accounted for in hospital budgets and will likely impact nurse staffing and care delivery—a critical issue which ANA recently addressed in a widely co-signed letter to the Center for Medicare Services.

But the healthcare bill will also impact nurses outside of the hospital setting. According to a recent survey of school administrators, over seventy percent of school districts turn to Medicaid to pay for the health professionals and school nurses needed to care for special education students. Since the senate healthcare bill would cut Medicaid spending by almost $800 billion and impose a cap on the amount of Medicaid-funded services any child could receive, school nurses and administrators are staunchly opposed to the bill.

Even if you don’t work in a hospital setting, and even if you don’t have children in school, it’s likely you will still be impacted by the healthcare bill being considered by the Senate. For example, we all have a vested interest in the health of our nation’s veterans. But of concern to veterans, VA nurses, and Veterans groups, 1.75 million vets stand to lose their Medicaid coverage under the healthcare bill, which in turn would impact the VA as more veterans seek care in that already overloaded and underfunded system.

Since Medicaid pays for most of the 1.4 million Americans in nursing homes, elderly Americans and nursing home nurses are also gravely concerned by the impact of the healthcare bill. The same goes for rural nurses and citizens, whose safety-net hospitals are projected to lose eighty-three percent of their net income by 2026 under the new bill.

The list goes on: whether or not you realize it, this healthcare bill will impact you and your practice, perhaps in ways that are unforeseen or unintended. That’s why the American Nurses Association is calling for a more thorough, nuanced, and bipartisan process for healthcare reform.

We urge the Senate to step back and approach this herculean task in a way that works for all Americans. For the sake of nurses and their patients, we can’t afford to get this one wrong.